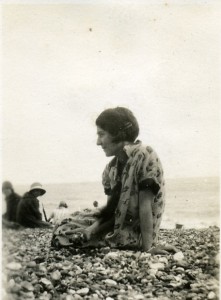 Adrienne Rich’s poem, Culture and Anarchy, published in 1984, is a patchwork of feminist/feminine acknowledgement, eclectic in scope and dwelling on the earliest years.

Rich’s anger turns from her own experiences to women far back in history who struggled for a voice and for their basic rights. “THE HISTORY OF WOMAN SUFFRAGE / of a movement / for many years unnoticed / or greatly misrepresented.”

The poet describes this difficult process as “The awakening of consciousness” and comments upon its effect on women’s poetry and the sense of victimisation in their work.

“I think we need to go through that anger and we will betray our own reality if we try… for an objectivity, a detachment,” she says, reversing the psychological inclination for women to internalise or repress their anger.

This is a liberating concept for women, for Rich not only refuses to accept the limitations of repression, but turns the argument around, making feminist anger not only acceptable but actually desirable.

Although she favourably reviewed Rich’s poem Diving into the Wreck, Margaret Atwood also accused Rich of sloganising. “The poems convince me most often when they are true to themselves… when they resist the temptation to sloganise, when they don’t preach at me.” Therefore, Atwood cannot respond to poems such as Rape and those about Vietnam War, although she admits to their inherent truth.

She wants to engage women in a manner felt both internally and externally, that can be deeply personal, yet relate to other women, past and present. She seeks the reality behind the myth of the past, with the aim of understanding and thereby achieving redemption.

Rich is generous in her acknowledgement of women who have created a place for themselves in history. She focuses not only on the middle/upper classes, but on poor, uneducated women. She names those who were active in the feminist movement, such as Susan B. Anthony and Anna Howard Shaw.

Rich also names those who were the first of their kind in fields other than literature and poetry; for example, Elizabeth Blackwell, the first woman doctor; and women who were poets or novelists. She also praises brave, black women like the one-time slaves Harriet Tubman and Sojourner Truth, who fought oppression despite suffering violence.

The poet seldom expounds on their individual achievements; it is as though she feels it is enough to state their names, that they need no further justification. This could be seen as a limitation if one takes the stand: “It is the poems which are available to us, not the poet’s mind,” as Montefiore suggests in Feminism and Poetry.

However, the refusal to elaborate demands that we become involved and discover for ourselves the truths behind each name.

The Dynamic between Language and Action

In Blood, Bread and Poetry, Rich says male poets such as William Butler Yeats, William Blake, Walt Whitman and Wallace Stevens influenced her, but her strength lies in her belief that women’s poetry challenges the existing canon and must be read differently.

She repudiates the warnings against mixing politics with art, dismissing them as “…the political declarations of privilege.” Refusing to accept that political poetry is limiting or lacking in breadth, she says: “I felt more and more urgently the dynamic between poetry as language and poetry as a kind of action, probing, burning, stripping, placing itself in dialogue with others out beyond the individual self.”

If there are flaws in Rich’s project, it should also be considered that, recognising the difficulties experienced by feminist thinkers at that time, she established a starting point and a framework. Rich is consistently honest in her appraisal of her own work, including its possible shortcomings and omissions. Her poetry is energising, courageous and open-ended, promoting further thought and discourse on an established foundation.

From Anger to Empathy

The juxtaposition of political sloganising with the more tender poems can be related to the competition/diversification dilemma, (meaning, respectively, imitating men versus constructing an alternative female tradition.)

Politically, Rich is specific and assertive in laying the blame on the old traditions of male superiority: “…our records usually not considered / of sufficient value to be / officially preserved / the strongest reason / for giving women all the opportunities.”

In this passage there is aggression and certainly it is highly competitive language: particular, detailed and with a strong central statement demanding compensation for past injustice. Contrasting with this traditionally logical male attitude, there is a sense of loneliness and despair, as she contemplates what is lost and can never be retrieved.

The fragmentary nature of the poem allows Rich to alternate from anger to empathy, stridency to gentleness, metaphor to direct speech, the domestic to the political and the specific to the universal. “Daylilies / run wild, “escaped” the botanists call it,” alludes to her own escaping life with her lover and can be seen as diversification, contrasting with the political language of other parts of the poem.

These different but related messages challenge the patriarchy, pronouncing her loyalty to the feminist cause, and asserting, through her glorification of love, domesticity and harmony between women, that she makes no part of the feminine life an anathema. She successfully accommodates both elements of the competition/diversification conflict.

Her writing, shaped by pressing external and internal forces, is both lyrical and political. She gathers to herself the feminine past, uniting it with the feminist present. While Rich considers her writing as “common language shared only by women,” the poem Culture and Anarchy seems to belie this claim; it is also read and admired by men.

This is not a limitation but a triumph.