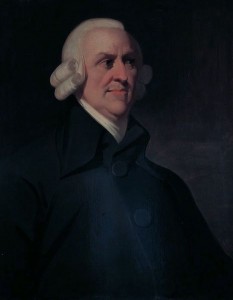 The Muir Portrait (named after the family who owned it) was painted around 1800 from a medallion by James Tassie, and is in the Scottish National Gallery. There is strong evidence that this is a true portrait of Adam Smith, although this is not conclusive. Painting by Unknown Artist. Image courtesy of P. S. Burton.

“No society can surely be flourishing and happy of which the far greater part of the members are poor and miserable,” quotes Jeremy Harwood in “Adam Smith,” 100 Great Thinkers.

Like his friend and colleague, the great philosopher David Hume, Adam Smith, was a key member of the Scottish Enlightenment. A believer in a free market economy, he is known as the father of modern capitalism. His views and works brought him fame and fortune in his lifetime, unlike Hume, his less fortunate but equally influential friend.

Smith’s main works were The Theory of Moral Sentiments, which he wrote while attending the University of Glasgow, and The Wealth of Nations, and these influenced one of the world’s leading modern female figures, Margaret Thatcher.

The central theme of his moral theory is touchingly optimistic, as Jeremy Harwood quotes in “Adam Smith” in 100 Great Thinkers.

“‘People,’ he suggested, ‘are born with an innate moral sense, just as they are born with inherent notions of beauty or harmony.’” Smith believed that in spite of their selfishness, there is something in human beings that draws them to other people, so that the happiness of others becomes important to them. This occurs even if there is no profit for them, except for the pleasure they derive from seeing it.

“We all possess an innate conscience, which is bolstered by natural fellow feeling – which he called “sympathy.”

The Wealth of Nations was the basis for Britain’s industrial revolution and the political economy during the nineteenth century, right through to the political thrust of the 1980s. This was the work that truly made his name and for which we most remember him. According to Harwood, this is much more than just a book about economics:

“It is a heady mixture of philosophy, economics, political science, history, sociology, and even anthropology.”

While she embraced Adam Smith’s theories, Margaret Thatcher was not known for having any special empathy with the status of other women. However, Smith, her inspiration, while not especially celebrated for upholding feminist values, sought equality and fairness in his philosophy. He believed that the unexpected consequences of intended actions would always be to the benefit of society in general.

From Mercantilism to Capitalism

During the 18th century, Europe’s economic system was mercantile. Mercantilism was a system that operated through government regulations in order to increase a nation’s wealth. In other words, all commercial interests were subject to government intervention in the allocation of goods and the determination of prices.

“Smith’s work is the first comprehensive treatment of the whole subject of political economy, and is remarkable for its breadth of view,” says the entry in the Oxford Companion to English Literature.

Adam Smith objected to the mercantile system, although he did not believe, like another order of economists known as the “French physiocrats,” that land is the sole source of wealth. On the contrary, he felt that labour was a far more important aspect of a nation’s wealth and life. He also valued the division of labour.

“Labour  is the standard of value, and originally was the sole determinant of price; but in a more advanced state of society, three more elements enter into price – wages, profit and rent,” says the Oxford Companion.

In Book I, Chapter V, Smith says: “What every thing is really worth to the man who has acquired it, and who wants to dispose of it or exchange it for something else, is the toil and trouble which it can save to himself, and which it can impose on other people.”

This theory is firmly rooted in the present, and we can take no history of value into account. If an item took a great deal of toil and trouble to produce, but is now useless, then for Adam Smith it has no value.

The second Book of The Wealth of Nations analyses capital, what it is, how it is accumulated and issues about employment.

“With the increase of capital there is an increase of productive labour and an increase in the rate of interest,” says the Oxford Companion, which then comments on Adam Smith’s vehement attack on the mercantile system, while maintaining his core belief in advocating the freedom of commerce and industry.

The Cambridge Guide to Literature details the remainder of the work. There was a Book III which explains different rates of growth in different countries and compared economic systems in town and country, while Book IV shows that mercantilism regards wealth only as money and not as goods. Book V outlines the need for limited government intervention where appropriate, for example, roads, canals, armies and education.

Adam Smith – Posthumous Son of a Controller of Customs

Smith was raised in Kirkcaldy, in Fife, Scotland, and attended Glasgow University. Later, while at Baliol College, Oxford, he developed an interest in David Hume’s Treatise of Human Nature, as a result of which, he came into conflict with college authorities. During his career he gave lectures on rhetoric and philosophy and, in 1751, he was Professor of Logic at Glasgow, and the following year, he chaired Moral Philosophy, which he continued until 1763.

Lectures on ethics were the foundation of his The Theory of Moral Sentiments published in 1759, a work which, according to the Cambridge Guide to Literature, led to his international reputation as a major philosopher. His work on jurisprudence and government were published after his death as Lectures on Jurisprudence.

During a tour of the Continent as a tutor to the Duke of Buccleuch, he met Voltaire and also began his major, revolutionary work, An Enquiry into the Nature and Causes of The Wealth of Nations, published in 1776. Later, in London, Adam Smith met other key establishment figures, Gibbon, Burke, Joshua Reynolds, Boswell and Garrick,  and also a man he disliked, Samuel Johnson. (According to the Oxford Companion to English Literature, Smith wrote a critical review of Johnson’s Dictionary in 1775/6.) He was on familiar terms with a number of other major figures of the Scottish Enlightenment.

His executors burned much of his work, but a History of Astronomy was published in 1795 as Essays on Philosophical Subjects.

The first mention of women occurs in Book 1, where he discusses poverty as being “favourable to generation.” His point is that although poverty does not discourage marriage, it does not always prevent it.

“A half-starved Highland woman frequently bears more than twenty children, while a pampered fine lady is often incapable of bearing any, and is generally exhausted by two or three. Barrenness, so frequent among women of fashion, is very rare among those of inferior station. Luxury, in the fair sex, while it inflames, perhaps, the passion for enjoyment, seems always to weaken, and frequently to destroy altogether, the powers of generation. But poverty, though it does not prevent the generation, is extremely unfavourable to children… The tender plant is produced; but in so cold a soil and so severe a climate, soon withers and dies.”

Smith continues by pointing out it was not uncommon for a mother of twenty children to have only two surviving. A better reward for labour would allow parents to produce and bring up more healthy children.

This was a very different world from the one that we, who are fortunate enough to live in the developed world, experience today.

Here is a section of the blurb from a new book by Katrine Marcal, scheduled for publishing on 5 March 2015, by Portobello Books, and available on Amazon in paperback and on Kindle. She takes the first sentence directly from The Wealth of Nations Book I, Chapter 2.

Mercal has some strong objections to the philosophy of Adam Smith.

“It is not from the benevolence of the butcher, the brewer, or the baker that we can expect our dinner, but from their regard to their own interest. When Adam Smith wrote that all our actions stem from self-interest and the world turns because of financial gain, he brought to life ‘economic man.’ Selfish and cynical, economic man has dominated our thinking ever since and his influence has spread from the market to how we shop, work and date. But every night Adam Smith’s mother served him his dinner, out of love, not out of self-interest. Today our economics focuses on self-interest and excludes all other motivations. It disregards the unpaid work of mothering, caring, cleaning and cooking. It insists that if women are paid less then that’s because the labour is worth less – how could it be otherwise? Economics has told us a story about how the world works and we have swallowed it hook, line and sinker. Now its time to change the story.”

But Tim Worstall, in his article: “So who did cook Adam Smith’s dinner” on The Adam Smith Institute’s website, disagrees and attempts to debunk Marcal’s book.

So Economic Rationality Does Not Apply to Women? “Poppycock!” says Worstall

Worstall believes we can only make sense of gender roles and the changes that have occurred within the concept of economic rationality. Simply, we cannot explain those changes without it. He makes a valid point about the narrow division of gender labour options available to our forebears, and that levels of technological progress impact on social relations.

He makes the point that women tend to do unpaid work described as “undifferentiated labour.”

“The undifferentiated labour rate is minimum wage,” he says. Therefore, we should file Marcal’s theory under “Poppycock.”

Worstall adds that modern inventions have disposed of the need for a servant class. He says: “Otherwise, we wouldn’t be in a world where one female journalist writes about a book by another one instead of them both being tied to the domestic treadmill in that game of producing grandchildren.”

Has no one explained to Mr. Worstall about multi-tasking – no doubt also filed under “Poppycock” and rewarded as “undifferentiated labour?” 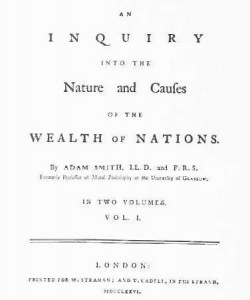 The front page of Adam Smith’s major work, The Wealth of Nations. (1776) Image by Gerhard Streminger.

How Mr. Worstall manages to reduce the role of producing children and grandchildren to a “game” I am at a loss to explain.

The American Rebels – a Prophecy

The Oxford Companion to English Literature comments on the importance of the appearance of The Wealth of Nations on the actual day of the Declaration of Independence of the American rebels. In Book IV, Smith says:

“They will be one of the foremost nations of the world”

The Oxford Companion adds: “To obviate the danger he proposed the representation of the colonies in the British Parliament.”

The Wealth of Nations has influenced political thought for many generations, including Marxist theory. According to the Cambridge Guide “Smith’s economics provided a manifesto for British politicians seeking to reduce state intervention in economic life.”

While individualistic, self-interest is advocated as the correct criteria for a proper economic system, this universal attention to a person’s own advantage does, in Adam Smith’ view, benefit society as a whole.

Pujol, Michele A. Feminism and Anti-Feminism. Accessed on February 26, 2015