Reconstructed helmet from the Sutton Hoo ship burial. It was found shattered into hundreds of pieces; reconstruction was a long, painstaking task. Photo credit: Paris Franz

In the early seventh century, King Raedwald of East Anglia “held sway over all the provinces south of the Humber,” according to the Venerable Bede, yet he remains a mysterious figure.

We’ve had to wait until the twentieth century for modern archaeology to supplement the sparse literary sources, throwing a flickering light on a character caught between history and the world of Beowulf.

Raedwald was a member of the Wuffinga royal dynasty, named for the semi-legendary Wuffa. Such was the extent of Scandinavian influence in the finds from the famous ship burial at Sutton Hoo, experts think the dynasty to be of Swedish ancestry.

The Kingdom of East Anglia remains tantalisingly elusive. Covering modern Norfolk and Suffolk in eastern England, the region has long been modest and retiring, ceding the historical limelight to rival Anglo-Saxon kingdoms such as Northumbria, Mercia and Wessex.

We have few sources from the period, probably due to the events of the ninth century, when Viking raids and settlements resulted in the disappearance of the major archive-holders of the day, the religious houses.

It wasn’t until the 20th century, and some spectacular archaeological finds, that the finer details of the history of East Anglia were revealed. It is clear from the finds of Iron Age torcs from Snettisham, and the Roman silver from Mildenhall, that the region was wealthy long before the Saxons arrived in the fifth century.

One of the most impressive finds was made at the site of Sutton Hoo, near Ipswich, where a richly furnished ship burial was discovered in 1939. The finds included finely-worked gold and silver, helmet and sword, drinking horns and gaming pieces, gold coins and silver spoons. Many of the finds were locally made, but others can be traced to Merovingian Gaul and the Byzantine Empire. It was a burial fit for a king. 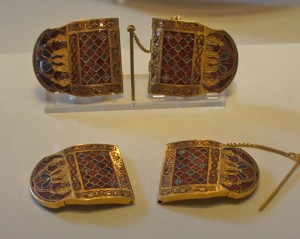 The archaeologists didn’t find a body in the burial chamber. Given the acidic nature of the sand, it is likely that the body simply dissolved over the 1300 years since it was first buried.

So, who was buried at Sutton Hoo? There are a number of candidates, including the founder of the Wuffa dynasty, Raedwald’s father Tyttila, Raedwald himself, and his son Earpwald, who died in 627-8. Later East Anglian monarchs were Christian, and there was little material overtly Christian found in the Sutton Hoo burial.

Raedwald remains the most likely candidate, due to the dating, and the sheer richness of the finds. In the absence of an inscription, it is impossible to say for sure.

What we do know of Raedwald centres on the religious and political machinations of the time. The early seventh century was a transitional period between paganism and Christianity, and religion was highly political.

Augustine arrived in Kent in 597, on a mission from Pope Gregory the Great to convert the Kentish royal dynasty, which he did with great effect.

It was on a visit to Kent that Raedwald converted to Christianity, only to have second thoughts on his return home, when he reverted to his ancestral religion. Diplomatically, he is said to have set up Christian and pagan altars in the same temple. Bede reports that King Aeldwulf, a later king of East Anglia, remembered having seen it when he was a boy.

Raedwald became bretwalda, or high king, in the year 616AD. It was around this time that he gave sanctuary to Edwin of Northumbria, who was being pursued by Aethelfrith, his rival for the Northumbrian throne. Raedwald supposedly refused a considerable sum of money offered him to have Edwin assassinated. Instead Raedwald confronted Aethelfrith in battle at the river idle in 616, and helped Edwin to the Northumbrian throne.

Raedwald is thought to have died in either 624 or 625, his position as bretwalda passing to the Christian Edwin of Northumbria. If he was indeed the occupant of the burial at Sutton Hoo, it was a fitting tribute to a great king and the passing of the pagan era.

Bede. A History of the English Church and People. (1968). Translated by L. Sherley-Price. Penguin Books.